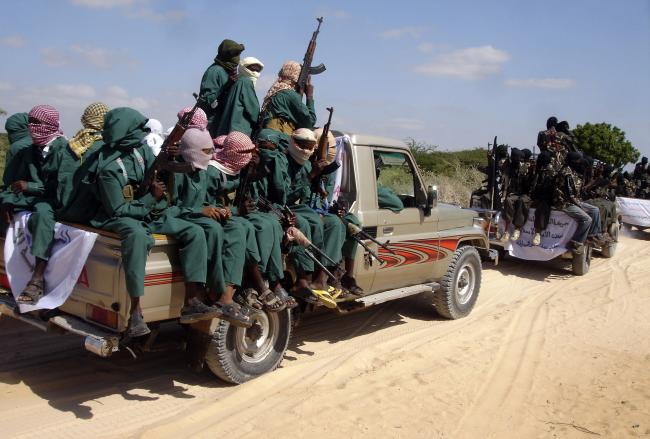 Somalia, Al Shabaab, and How Geography Screwed A Country

The odds are good you’ve seen Black Hawk Down, where the story of the disaster that was the battle of Mogadishu is told rather well.  With such a baseline of knowledge, you’re aware that, at some point in the recent past, Somalia was a mess.  Things haven’t changed much.

Somalia is the king of Failed States – a title that involves having no real government, warlords, pirates, drugs, and pretty much every war crime, human rights violation, and general barbarism that you can imagine.  It’s The Road but not as cold and with less necessity for cannibalism.

Then there’s Al Shabaab – Arabic for “young men,” who, while made up mostly of young men, are also consummate assholes. Throw in Captain Phillips, the Kenya Westgate Mall butchery, and the occasional piracy stories that pop in the news and Somalia’s well-deserved reputation as World’s Worst Country is fully established.

But Somalia was not always such a basket case.

Somalia’s been geographically screwed since the Ice Age

Somalia is not all that far off from what Arabia would been if oil was never discovered.  With little water, low rainfall, open plains that allow invaders to come and go as they please, and no forests, jungles, or canyons to hide in, Somalia was a strategic liability for the only pre-modern indigenous state in the region, the empire of Ethiopia, who, with their highlands and better rainfall, set up a powerful state that tussled with Somalia nomads over the Ogaden desert.

That was more or less Somalia’s history up until the coming of the Italians.  Being unable to feed itself, Somalia never advanced beyond tribalism, with warlords fighting over the same turf forever.  Arabic and Islam made their way to the country by way of trade and pious missionaries, but Somalia, being Somalia, quickly morphed both into local forms, since without a central government no single version could be imposed.  (Somali Arabic is foreign enough that, here in Qatar, the pirates of Captain Phillips still required Arabic subtitles).

Until the day the Italians got interested, but only because there wasn’t much left on the plate

In the Scramble for Africa, Italy got a late start.  Italian nationalists sought great power status, which included colonies, but the best parts of Africa were already grabbed by the French, British, and Belgians.  So Italy took what it could get, included the arid coastline of Somalia, where they slowly set up a colonial state by playing local warlords off one another.  (The other choice piece of real estate Italy grabbed was Libya, where no oil had yet been found and which was a liability even in Roman times).

Somalia was held as a matter of national pride and never paid for itself, but came in handy as a base for the 1936 invasion of far more valuable Ethiopia.  During World War II, the Allies ran a sideshow campaign to liberate Ethiopia and conquer Somalia from the Italians.  After the war, it was held as a UN trust under Italian administration until independence in 1960.

Italy put a lot of effort turning this otherwise unremarkable piece of real estate into a productive colony.  Because of the harshness of the environment, productivity could only be maintained so long as an outside power was willing to dump money into the country to bribe clans, set up companies and businesses that stood a snowball’s chance in Hell of becoming competitive in the short term, and keep a government running.  Italy was willing to do this up until World War II because Somalia served as a beacon for nationalist pride in addition to being a base to strike at rivals throughout Africa, the Middle East, and the Indian Ocean.

After the war, the UN kept the money flowing as part of its decolonization scheme to bring freedom too early to Africa.  The tribes were happy and the peace was kept.

Up north, in British Somaliland, the situation wasn’t much different, with the British even less interested in running a productive colony.  Somaliland, for Britain, was a base to keep the Suez Canal open between Britain and India.  With Aden in Yemen to the north, it ensured no power could easily blockade the Red Sea and prevent British trade.  Of course, once India gained independence, British interest in both colonies rapidly waned.

When the “Winds of change” rolled through Africa in late 1950s and early 60s, Somalia was one of the least prepared countries for it

Much of Somalia’s peace was due to outsiders running the show, bribing locals, and keeping them busy with various development projects.  Little was invested in a Somali civic society, and, like many African colonies, the early years of the country followed the How-To Guide to Colonization.  Democracy was promptly set up and promptly became a mess.  Clans jostled for power while elites in Mogadishu talked highly of all kinds of things that were irrelevant to a country that couldn’t figure out what to do with its nomads.

Unlike Saudi Arabia, who by 1960 was rolling in oil money, Somalia didn’t have the money to bribe people into compliance.  Democracy died in the 1969 coup, which established a military dictatorship that put many of the country’s demons into a Somali Pandora’s box.  Through brute force and hefty doses of nationalism, Siad Barre ruled the country with as iron of a fist as he could afford.

So he went trolling for someone, anyone, to help him keep that fist up to date

Like many post-colonial societies, Barre saw socialism and communism as the answer to the tribal nightmares that plagued his country.  So he promptly joined the Reds and went to work using their ideology to end tribal identity.  As part of the Cold War, the Soviets and Chinese saw Somalia as a nice little piece their networks of African clients, with Ethiopia being the prize of East Africa.  Like the Italians, it was a lovely place to pressure enemies all around the rim of East Africa.

But in his war on the clans, Siad Barre relied on a newly-minted Somali nationalism that sought to bring all Somalis under a single flag.  When he actually tried to do that in the Ogaden War, the Soviets and Cubans rode to Ethiopia’s rescue and wiped out Somalia’s army.  Siad Barre retreated, tail between his legs, to the lower rungs of power, and shortly thereafter switched sides to the Americans, who were happy to bribe him on the cheap as they sought to turn Somalia into a base to take down Red Ethiopia.

Such was the glue that held Somalia together

Nobody should have been under the illusion that Somalia had changed.  Nomadism was still popular and the only thing that kept society from returning to its roots was the army, bought and paid for by the United States.  That lasted until the end of the Cold War, when the aid promptly stopped.

It was impressive how fast Somalia fell apart.  Unable to bribe, with nationalism discredited by the failure of Ogaden War, Siad Barre had no leg to stand on.  Being a dictator without an army is a bad place to be; when the time came to start the shooting, he had nobody but his clan on his side.  Ironically, Barre had spent much of his life trying to undo the one thing that ended up saving his life.  Meanwhile, Somalia as a state collapsed and people returned to their pre-modern ways.

With no strategic resources and no great power competition jostling for control of the Suez, Somalia had dropped back to its place as worthless.  The UN got involved in the mistaken belief that, with the Cold War over, it was now the time to sort the rest of the world’s problems.  But the UN humanitarian mission that crescendoed in Black Hawk Down died as soon as outside powers realized building a state in Somalia would be hard, long, and very unlikely to pay them back.  The international community abandoned Somalia to its fate by 1995 and the warlords, once kept in check through bribery and outsider-supported institutions, returned.

The Al Shabaab movement came out of what was called the Islamic Courts Union, a pan-Islamic movement that tried, much like Siad Barre, to use a foreign ideology to erase tribalism in the country and get the state moving again.  Unlike Barre, the ICU used local religion.  Like the Taliban in Afghanistan, they were harsh but predictable in their meting out of justice, and they gained support often because they stopped the shooting.  2006 was the height of their power; that was the year they held Mogadishu.

Alas, they came of age during a War on Terror, and their overtly Islamic overtones could not be tolerated by either the U.S. or nearby Ethiopia, who also worried about Islamic extremism.  In 2006, the Ethiopians invaded.  Somalia’s geography betrayed it yet again; the invasion was swift and resulted in an Ethiopian occupation of key regions.  Meanwhile, African states, led by rising African power Uganda, decided on another international mission to attempt to set up a government in the shattered country.  Without the West’s cash, they could move only slowly, but because of that slow movement have been more successful in putting pieces of the state back together.

Now, Al Shabaab have split from the ICU and gone insane.  Openly affiliated with al-Qaeda, they seek to bring about the same world destruction that they think will bring about a world caliphate – dominated by them, of course.  As state power slowly expands into their territory, they grow more desperate and radical.  They are outgunned, but remain capable of striking targets that one wouldn’t normally think of as a military target – think a shopping mall or some dudes cheering for their favorite football team.

So the pattern continues

The central government of Somalia is once more propped up by outsiders, but weaker and poorer outsiders than ever before.  Somalia itself doesn’t have the natural resources necessary to build a state and both the West and its many enemies see no advantage in dumping funds into this particular desert.  Somalia has become an African problem and has tested the African Union to its limits.  So far, they have held firm.

Such poor places need long spaces of peace to turn themselves into something useful.  Somalia has not yet had that.  If the AU can hold the line, in another decade or two, the situation will calm and the hard work of building an economy and effective government can begin.  But history has shown outsiders lose interest in Somalia easily.  Poor people don’t hold much attention for long.

12 thoughts on “Somalia, Al Shabaab, and How Geography Screwed A Country”