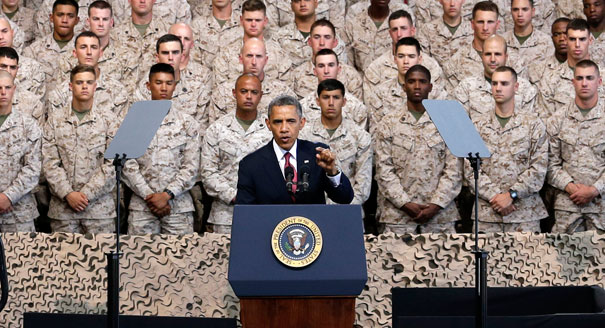 What Obama Can Do As His Clock Ticks Down (Or: How Geopolitics Constrains Even The American President)

With such power, the United States can just about wreck any other military force on the planet.  When American war planners refer to China and Russia as “near peers”, it’s not just condescending – it’s also a fact.  Nobody does it better.

And with the command of such power as Commander-in-Chief, Americans and people around the world make assumptions that someone with the finger on the nuclear button can just about make anything happen.

The cliff notes!  Because getting bored is easy and Netflix beckons.

So first to the oft-cited misconception:  America may be super powerful, but it’s not God.

Case in point: Iraq.  No matter how much blood, treasure, or troops were committed to Iraq, Iraq would still have ended up under Shi’a domination with a Baghdad that would have marginalized the Sunnis and grown closer to the Iranians.  That’s just how a democratically-established state in Iraq was going to go; only through several generations of occupation and cultural genocide could America have changed that.  And even that extreme measure would have been a long shot.

America’s defeat in Vietnam and it’s less-than-awesome adventures in both Iraq and Afghanistan have been useful wake-up calls to Americans who believe their overwhelming power means they can do whatever they want.  America can’t, and presidents know this best of all.

So presidents, who also are not all-powerful, must pick and choose where they think they can win.

A president’s final years are called “lame duck” because of his relative impotence.  By that time, everyone knows that any decision he makes can be reversed quite soon.  Moreover, the media takes its focus off the president and onto the upcoming election.  This all combines to make him breathtakingly weak compared to his first two years.

So many presidents use their final two years to engage in pet projects.  They advocate ideals and try to solve problems that upcoming elections forced them to shelve in years past.

And it’s on the foreign front that presidents have the greatest power.  As the commander-in-chief, the president does not need Congress to authorize an air strike or commando raid.  Depending on his political situation, a president may try to get big geopolitical affairs sorted.  But Obama, now facing a hostile Congress, is unlikely to do so.

So what can Obama do?  Well, with a Congress that hates him and a public that’s war-weary, not much.

Obama’s foreign policy legacy is not in great shape.  The rise of the Islamic State might be pinned on him; he withdrew American forces before Iraq was ready.  Syria is a nightmare, Ukraine is being slow-chewed by Putin, and China’s great power status is ever growing.

Obama does not have the political capital to fix anything but the easiest problems.  Most of all, he can only set the stage for the next president; he doesn’t have the time to deal with any of these massive challenges.  So he must stall the growth of hostile powers wherever he can and hope the next president is wise enough to pick up the slack.

All the great challenges to the United States are more on the potential rather than actual side of things, which makes it very hard for Obama to rally people to his solutions.

The Islamic State potentially threatens the world’s oil supplies; Russia still potentially threatens to shatter Europe’s general peace; China potentially will challenge the United States.  These are all very big events and are very much worth focusing American power on, but they are not actual threats, and so they don’t sell as well to the American public.  As long as that remains the case, Obama can only muster enough political strength to try to slow their growth.

However, game-changers exist.  Each of these potential hinge points would be a wake-up call to the American public and their politicians.  For IS, it’s capturing another major city – Aleppo, Damascus, or Baghdad.  For Ukraine, it’s the fall of Kiev or a large -scale Russian invasion; for China it’s a shooting gallery over a disputed island with an American ally.  It’s entirely possible something like that happens, but until they do, Obama’s political constraints will make it so he can only devote limited American power to any of these major geopolitical threats.

But one area Obama retains the most influence of all is diplomacy.

Americans as citizens don’t know or care much about their nation’s diplomacy; they tend to make assumptions about other nation-states based on popular culture rather than rational interest.  This is a massive failing of the U.S. education system, but it does free a president up to wheel and deal because most Americans can’t be bothered.

Obama’s thaw with Cuba came almost immediately after his party’s November 2014 defeat.  Why?  Well, he certainly couldn’t lose any further during his presidency, and the relationship with Cuba did certainly need to be redefined.

Geopolitical need can thus propel a president to act on interests that have been back-burned for years.  Cuba’s embargo and isolation made little sense outside of the Cold War, but has been kept on thanks to a well-organized lobby based in electorally vital Florida.  That lobby has weakened and Obama has pretty much nothing to lose.  So he’s making a call that makes geopolitical sense.

The same goes for America’s relationship with Israel.  Israel’s aggressive expansion of its settlements and continued occupation of Palestinian territories makes it a strategic liability for the United States, which needs Arab partners to manage the Middle East.  Th settlers’  actions serve Israel, and specific Israeli politicians most all,  but not the U.S. Yet another well-organized lobby has done a fantastic job keeping Israel safe from the geopolitical chopping block for decades.  The U.S. does need Israel to keep the Middle East well-ordered, but no more than it needs Egypt, the Gulf states or, most recently, Iran.

So now that the Israeli lobby can hurt him no further, Obama can use his influence to push Americans to really question why the hell they give such unquestioning support to a nation-state that harms American interests.  When he or his officials call Benjamin Netanyahu names, the message to Israelis is clear: moderate or get set adrift.

Finally, Obama can push to bring Iran back into the American-led world order.  This doesn’t mean the end of the Islamic Republic, which will remain a real nasty thing until reformers in Tehran gain the upper hand.  But it does mean putting Iran into a category much like Saudi Arabia: wretched but useful, better to have close than to let wander.  Iran, far more geopolitically important than Saudi Arabia, would be a fine prize for Obama to rest his legacy on.

All of this remains true so long as conditions remain constant (which they probably won’t).

Obama does not have the political power to solve much; only through a massive game-changer will he be allowed to act.  Where he can act, he must be subtle or diplomatic.

The final two years do offer an opportunity for America to start to break free from the ideological purity that has led it to disaster in Iraq, Vietnam, and to lesser degrees elsewhere.  Rather than concentrating on how America feels, it can start to concentrate on what America needs.  Such a legacy would be most welcome.  We’ll see if Obama manages it.

6 thoughts on “What Obama Can Do As His Clock Ticks Down (Or: How Geopolitics Constrains Even The American President)”