Will Russia Go Into Libya Next?

Herein may sound like rampant speculation, but I’m not the only one considering it: according to The Economist, high ranking European diplomats also wonder if Russia will make Libya the next frontier of adventure.  There are good reasons to consider why Putin may be doing so.

First off, a brief history of Putin’s affair with war.

Vladimir Putin was anointed president in 1999 as the Russian Federation teetered between currency crises, political instability, and a general sense that all was not right in Moscow.  While the collapse of the ruble in 1998 hammered the economy, separatists in Chechnya had defeated the mighty Russian army and carved out their own briefly independent country.

Reordering the Russian economy was too tough a bill to achieve quickly; it required structural shifts in both Russia’s economy and society that were just too big a pill to swallow in the late 90s.  As Putin sought to overcome the post-Soviet chaos and establish legitimacy as only the second president of Russia, he needed something akin to a political sliver bullet – something that would slay the beasts pulling the Federation apart.

So he turned to literal bullets, and he ordered them fire more or less at random into Chechnya.

The second Russian invasion of Chechnya was brutal and costly, but from a geopolitical standpoint its bloodshed stemmed further Russian disintegration.  The Russian army emerged victorious; battered, but at least still capable.  Putin, meanwhile, began his long path to becoming yet another Russian strongman.

Ordinary Russians were happy to give him approving marks.  Long accustomed to Soviet propaganda that emphasized the Union’s military prowess, Russians needed a leader to demonstrate that just because they gave up on Communism did not make them weak.  The leveling of Grozny did just that.

And a murderous political relationship was born: every time Putin went to war, his poll numbers would go up, so long as he avoided outright disaster.

The hard occupation of Chechnya, and the ensuing terrorism, did not produce the kind of backlash for Putin as Iraq did for George W. Bush – Russians were more likely to want a strongman in charge in the face of such challenges.

This gave Putin the political capital he needed to push Russian power back into old stomping grounds.  Chechnya was just the first; in 2008, it was Georgia’s turn.

But let’s be clear: Putin did not create a crisis in Georgia; he simply exploited one.

Putin had all the incentive in the world to keep Georgia from full unification: like many post-Soviet states, it had had a civil war in the 1990s that hadn’t fully cleared itself, leaving two statelets, South Ossetia and Abkhazia, outside of Tbilisi’s control.  This was hardly Putin’s doing, but it served Russian interests by making it very tough for Georgia to join the EU or NATO. 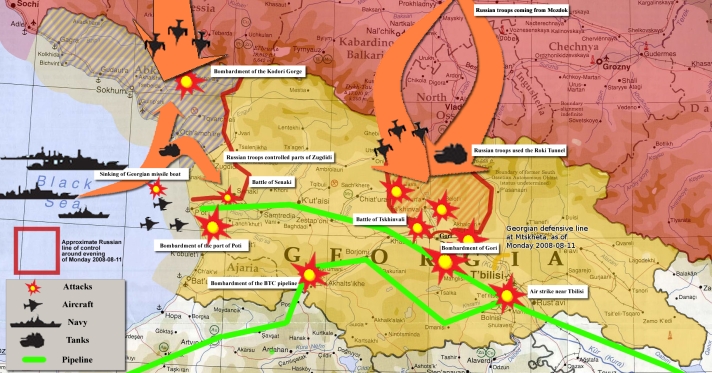 When Georgia’s president sent troops to reconquer South Ossetia – just as Putin had done to Chechnya in 1999 – the Russian president saw opportunity.  Within hours, Russian forces surged into Georgia, battering the republic’s small army and threatening to roll into the capital.

But Putin stopped short of that: the brevity of the war boosted his poll numbers and the overwhelming use of force made the conclusion foregone.  To occupy Georgia would hardly serve his needs: even in 2008, Chechnya still simmered, and the Russian military hadn’t performed as well against tiny Georgia as it should have.  Rather than expose himself to the liabilities of occupation, he was content to return to the status quo ante.

This showed the limits of Putin’s ambition: understanding that unconventional warfare had helped bring down the USSR in Afghanistan, he would do all in his power to avoid the same mistake twice.

Which is why he never marched on Kiev, when he readily could have.

After the revolution of 2013 and the ensuing Russian invasion of Crimea and eastern Ukraine, Putin might well have rolled into Kiev and conquered the whole country.  But he didn’t; his annexation of Crimea fit a neat and narrow bill, with its population vastly pro-Russian, its geography easy to fortify, and its strategic use worth the risk.  But to move beyond that was too much for Russia: to invite a long guerrilla war in Ukraine would bleed the Russian military dry.

Relying instead upon limited force in eastern Ukraine, he’s been content to let the conflict simmer, knowing that a divided Ukraine is one that cannot so easily join the EU or NATO.  Once more, as he’s done so, Russians have been thrilled to see their forces win easy victories.

But that was his near abroad; it’s his jump to Syria that causes many to speculate he may well try his hand in Libya next.

The sudden intervention in the fall of 2015 – and the withdrawal months later – followed the same pattern for Putin.  Seeing an opportunity to use maximum force with minimal risk, Putin showed Russia to be a reliable ally, won easy popularity points at home by bombing the Islamic State, and exposed Russian forces to only some manageable risk.  It was never Putin’s intention to help Assad reconquer all of Syria; like in Georgia and Ukraine, his interests were served by a return to a stalemate.

This whole affair proved that Putin could and would go further afield to find fights he could easily win – and easily escape.  Leaving Assad to his own devices, Putin emerged nearly unscathed from the intervention.

So why Libya?  It helps there is an easy bad guy there: the Islamic State.

In the chaos of Gaddafi’s downfall, much of the former dictator’s homeland was ravaged by rebels happy to embark on bloody revenge.  This left an embittered and angry segment of Libya based in Sirte, Gaddafi’s hometown.  Much as the Islamic State siphoned up former angry Ba’athists in Iraq to provide the backbone of its organization, IS’s franchise in Libya has done the same with the survivors of the Gaddafi regime.

Meanwhile, Libya is split between an internationally recognized government in the east and a local, Islamist-dominated parliament in the west: these two have been fighting a civil war since 2014 as the IS statelet has grown.  The West has not wanted to go to war in Libya yet again to settle the civil war, allowing it to worsen.  This leaves a power vacuum worth exploiting.

Doubtless, Putin sees it.  The formula is easy enough: use submarines and other naval assets to bombard the Islamic State, coordinate with one faction or another to gain ground, and reap the easy propaganda points.  The West will mutter, but Moscow will get away with this one so long as the target is the Islamic State.  Putin will undercut NATO as the fighter of terrorism while once again exposing Russian forces to minimal risk.

Putin doesn’t have friends on the ground, making him unlikely to use troops. But an air war against the Islamic State is precisely what the Putin machine ordered. Will he take it?

2 thoughts on “Will Russia Go Into Libya Next?”