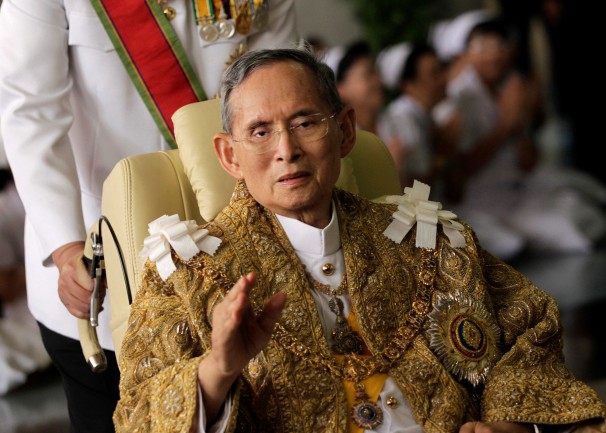 The Death of a King and the Future of Monarchy

(While mine, this article originally appeared on The Atlantic Sentinel.)

Thailand’s King Bhumibol Adulyadej had a long run: from 1946 until today, his living memory involved Japanese occupation, Cold Warriors burning Vietnam, the self-immolation of Cambodia, the shunning and decades-later rehabilitation of Myanmar and the rise of China.

His death leaves many questions for Thai politics, not the least of which is what to do with the widely disliked crown prince, heir apparent to the throne.

But it also reveals the slow grind down of monarchy as a system, as Thais contemplate — quietly for now — whether they even need a king at all.

An age-old tradition dying out

There are 43 nations left with monarchs as heads of state; sixteen of those are headed up by the queen of England, Elizabeth II, whose own death cannot be long in coming.

A century ago, most of humanity lived under an emperor, king or queen. Today, not even 500 million do.

This is because humanity has developed well beyond what a monarchy can govern. That’s because they’re a very specific reaction to a time and place for humanity.

When people were clustered in tribes, the great threat was endless tribal warfare, raids going back and forth in cycles of vengeance and hatred. Tribes rely heavily on their chiefs or elders to run the show; these chiefs or elders can often get away with endless abuse and corruption while being able to sacrifice tribespeople to keep their power and position. The chiefs or elders are almost always linked to the rest of the tribe by family lineage. This is a huge reason why they can’t govern other tribes very well: even if two tribes agreed to mix, the lineage problem crops up eventually and tribes either split away or go to war with one another.

Monarchy solves this problem by creating a new supra-tribal family: a royal nobility, elevated above the morass, able to control everyone else. This makes a huge amount of sense to tribal folk: a group still linked by blood calls the shots. It’s a key reason why tribes often readily accept monarchies or pseudo-monarchies but struggle with democracies. For them, a family of rulers at the top simply makes sense.

This works only so long as populations are relatively low and spread out. Shove many millions into cities, however, and the system gets overwhelmed. That’s because the most important decisions must go to family members in order to keep the monarchy in power. But when a country becomes too big and too powerful, a royal family just can’t keep producing the intelligent, well-spoken babies needed to run the show.

Wise monarchs realize this and start to delegate beyond the family. They eventually create constitutional monarchies.

The Hanover family of Great Britain saw this as the only obvious choice as early as the eighteenth century; the English Civil War had hammered the point home.

The French Bourbons, by contrast, didn’t read the writing on the wall. As France’s population grew in the eighteenth century, the French monarchy grew less able to control and govern. The rest of the tale tells itself.

This is exactly what happened in Thailand’s kingdom. With improving rice yields, the country became an official constitutional monarchy in 1932. King Bhumibol Adulyadej spent his seven decades of power largely avoiding direct politics.

He watched many other monarchies die. The list is long: Italy in 1946, Egypt in 1952, Libya in 1969, Ethiopia in 1974, Nepal in 2008. Some, like Italy, delegated power to the wrong sort; others, like Ethiopia, remained so stodgy and inflexible that it was just a matter of who overthrew the monarchy. King Adulyadej made none of those mistakes.

Humanity is only growing more complicated and no monarchy is keeping pace. Republicanism bubbles beneath the political surface of any state still ruled by Queen Elizabeth II; her popularity is the only thing that keeps it from bursting forth. Will the Commonwealth so readily accept a King Charles?

Like King Adulyadej, the British monarchy is popular precisely because of personality. Unlike the Thai king, the House of Windsor has no tanks to roll out in case people call for a republic. Having now evolved to the most rational state a monarchy can be — a figurehead and tourist attraction — the British monarchy will only last so long as people are amused by it. That is a far cry from the days of Queen Victoria.

This isn’t quite the situation in Thailand, where Bangkok’s military and business elite see value in the royal seal. But should the new king of Thailand prove inept, they may well shove him aside as readily as Colonel Gaddafi did Libya’s King Idris in 1969. In many ways, the situation resembles Jordan or Morocco, where Arab kings balance popular appeal and a need for modern government with their own hopes to remain in their palaces forever.

Only in the Arabian Peninsula is monarchy wholly unchallenged. There, the Arab states of the Gulf Cooperation Council, headed by Saudi Arabia, continue to run absolute monarchies as though a hundred years had not passed since the fall of the great houses of Europe. Even there, however, there are undercurrents of something beyond.

Most Gulf monarchies have some form of toothless parliament. The United Arab Emirates is officially headed by a president, albeit a sheikh. In the sultanate of Oman, the dying gasps of Sultan Qaboos worry those who support the monarchy; he has yet to name an heir. In Kuwait, a feisty parliament is kept in check by an autocratic emir, but his power is much reduced from the good old days. Bahrain’s embattled kingdom is on life support via the Saudi army. Little Qatar, with fewer than 300,000 Qataris, has virtually no need of a much more advanced government, though the emirate’s many expats will grumble otherwise.

This leaves Saudi Arabia, arguably the most powerful monarchy left on Earth. Engaged in proxy war in Syria and direct war in Yemen, led by the increasingly feeble King Salman, who has delegated much power to Deputy Crown Prince Mohammed bin Salman, Saudi Arabia is fast approaching a development point where the monarchy will not be able to keep up with the needs of a twenty-first-century state. There is little sign the Saudis are prepared to give up power; their legislatures are uniquely useless.

Time is rapidly running out out for monarchs to rule. They can either adapt or be overthrown. The new king of Thailand would be wise to step further away from power if he wishes to keep his palace. Monarchs worldwide, such as they are, should follow.