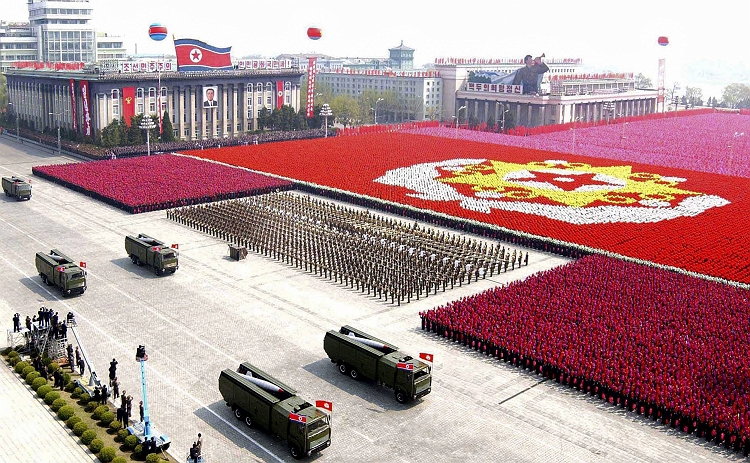 A U.S. Navy strike group will be moving toward the western Pacific Ocean near the Korean peninsula as a show of force, a U.S. official told Reuters on Saturday, as concerns grow about North Korea’s advancing weapons program.

Earlier this month North Korea tested a liquid-fueled Scud missile which only traveled a fraction of its range.

The strike group, called Carl Vinson, includes an aircraft carrier and will make its way from Singapore toward the Korean peninsula, according to the official, who was not authorized to speak to the media and requested anonymity.

Don’t hit the World War III hashtag; we’ve seen this naval saber rattling before, most notably in 1995 -96 during the Third Taiwan Straits Crisis.  Those were the days before Twitter, when media-induced panic had to be exemplified by news anchors who were allowed brief moments of humanity.

North Korea has been testing an awful lot of missiles lately; some are duds, all worry American allies in East Asia.  The young despot, Kim Jong Un, has clearly been trying to gauge just how serious Donald Trump’s isolationist rhetoric really was during his campaign.

In that sense, Assad’s chemical attack last week and Kim’s routine bombardment of the Sea of Japan are linked: the most rogue of rogue states are trying to see if Trump has set them free.  Assad has learned, at least for now, that if anything Trump will be even stricter than Obama when it comes to American-led norms.  Will Kim get the same lesson?

If Trump is playing the Madman card (in concert, surely, with his Defense Secretary, James Mattis), he is trying to rattle the North Korean Old Guard, some of whom are literally so old they fought the last Korean War.  These aged generals may be able to reign in Kim, or even push him out.  Of course, one of Kim’s first acts was to murder one of them.  But a wider purge did not follow. In February, Sputnik news spoke to two South Korean academics, who said:

“The fact that North Korean State Security Minister Kim Won-hong, fired and demoted in January, continues in his present rank means that there is no purge currently underway of the country’s top military brass,” Kim Dongyeop, professor of the Institute for Far Eastern Studies at Kyungnam University, told Sputnik.

In other words, there are still plenty of Old Guard left to rattle.

There is another way that North Korea and Syria are linked, however.  When Trump hit Syria, he did so symbolically, rather than strategically, with an emphasis that if he could do it once he could do it again.  This approach did not result in World War III, despite the trend on Twitter.  It’s entirely possible that a strike on an empty North Korea missile platform could do the same. Such a strike would also spook China, whose cooperation is needed to finally reorder East Asia to America’s liking.

Trump may play the Madman card even closer to his chest in the weeks ahead.