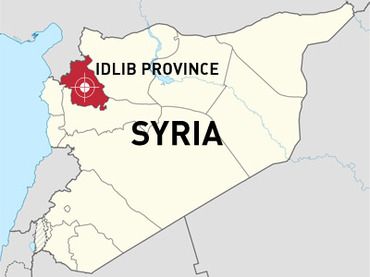 ISIS vs. Al-Qaeda Infighting In Idlib Province In Syria Is A Sign of Things To Come

A suicide bomber rammed a car laden with explosives into a gathering of jihadist rebels near the rebel-held northwestern Syrian city of Idlib on Wednesday, killing and injuring scores, rebel sources said.

They said the blast ripped a textile factory where members of Hayat Tahrir al Sham, an alliance of rebel groups whose backbone is the former al Qaeda affiliate Nusra Front, had been using as their quarters. At least 12 were killed, one rebel source said.

If there is a place the Syrian civil war will end, it will be Idlib.  The crucible of the old rebellion, the one that started before the uprising became everyone’s favorite proxy war, it is, after the Islamic State, the last wildcard left on the map.  When it is gone, the outside world can impose whatever order it likes on Syria.

Idlib province is the last major rebel bastion that isn’t Kurdish, Islamic State, or an American-backed proxy.  It is a hodgepodge of different rebel groups, including the U.S.-vetted Free Syrian Army, the Turkish-backed Turkmen, and al-Qaeda itself.  In a lot of ways, the difficulty in keeping track of the rebel factions of Idlib is a microcosm of everything wrong with the Syrian rebels.  There are too many factions, with too many ideologies, in too tense an alliance, to be very effective.

This has served Assadist and Russian propaganda well.  There are very real Sunni supremacists within Idlib, including al-Qaeda and fighters from the dying Islamic State (IS).  But the Turkmen and Free Syrian Army factions aren’t the same thing.  That doesn’t do them much good under carpet bombing, however.

Idlib became the redoubt of the rebellion after its main offensives in 2012-13 stalled in Aleppo, Damascus, and Latakia.  Assad was content to retake the cities and leave the rural places be in those days.  Idlib was largely left alone.

In this comparitive safety, well-supplied by Turkish routes, Idlib became a proxy war within a proxy war, with different ideologies tussling for power.  When IS launched its 2014 blitz, it largely abandoned any attempt to hold Idlib, leaving al-Qaeda as the largest faction there.

As Hama and Homs, two key cities on the road to Damascus, fell back into Assadist hands, the rebellion retreated further and further back into Idlib.  It became enough to simply hold the siege of Aleppo, but relentless Russian bombardment and aid finally broke their back in late 2016.

There doesn’t appear to be a rebel strategy anymore.  Instead, factions are gearing up for what they’re assuming will be a near-certain peace deal in the future.  Once the madness of IS is wiped out, surely even al-Qaeda can gain itself a fiefdom out of a bargaining table.  That’s a big reason why al-Qaeda has been rounding up IS fighters in Idlib.  If America is in Syria only to destroy IS, it might just get overlooked after Raqqa falls and IS goes underground.

Of course, there’s also the mantle of Qutbism to be reclaimed.  The founder of Sunni supremacism, Sayyid Qutb gave rise first to the violent brand of the Muslim Brotherhood and then, when the Brotherhood moderated, to al-Qaeda and IS.  As IS goes to ground, al-Qaeda intends to leave no ground to go to, at least in Idlib.

That serves other rebel factions well enough.  They’re digging in for the near-certain assault by Assadist, Russian, and Iranian forces.  They have some solace that Turkish forces nearby could provide them cover – it wasn’t far from Idlib that the Turks downed a Russian jet in 2015.  Fear of crossing into Turkish airspace may slow the all-important air campaign and stiffen the rebel line.

Yet if the Idlib rebels think they’re part of anyone’s calculations, they overplay their hand.  American troops have been unleashed by a careless commander-in-chief; civilian casualties from U.S. bombs are up.  As IS is destroyed, Idlib’s al-Qaeda must be next.

Turkey, meanwhile, seems content to keep the Kurds distracted and split, and so while it may give succor to the Turkmen, it will surely let the other rebels twist in the Russian bombing wind.  The Gulf states are so distracted with their own disputes as to hardly matter anymore.

So al-Qaeda is making a play to wipe out IS before the inevitable offensive on Idlib comes.  As the value of Syria’s civil war drops to its main proponents – the U.S., Russia, the Gulf states, Turkey, and Iran – the push for a peace deal will get stronger.  Since hardly anyone cares much for Idlib, it will be allowed to endure an Assadist scorched earth.  With Assadist forces freed up in the southwest, look to a future battle of Idlib to come.

2 thoughts on “ISIS vs. Al-Qaeda Infighting In Idlib Province In Syria Is A Sign of Things To Come”