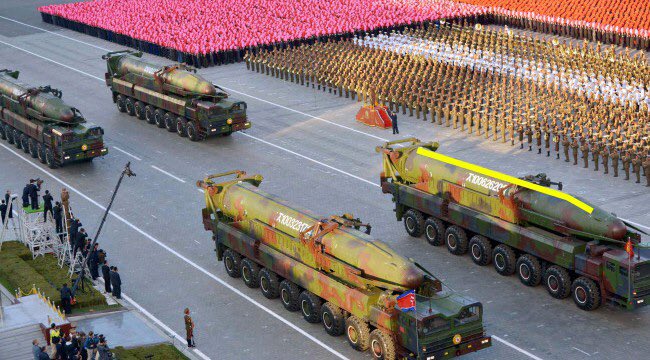 Why would anyone “beg for war,” in the words of American ambassador to the UN Nikki Haley?  Why would anyone say such a thing, when they seem to gain so little from war?

The consequences of a general war on the Korean peninsula are obvious to anyone who’s bothered with half an article from a litany of sources.  The mushroom clouds, the artillery barrages, the refugee crisis, the body bags – it all beggars the imagination.

Yet here we are, wondering if we shall have a second Korean War, when no one thinks it’s a very good idea.

On most superficial of surfaces, this is the tale of a Korean madman facing down an American one – of two sons of privilege unused to being told no meeting one another on the world stage.  Or it might be the story of familiar American imperialism, wearing a Trumpian mask, reaching for the throat of the last Marxist paradise on Earth.  Or maybe it’s a simple good guy vs. bad guy narrative and the butcher of Pyongyang merely seeks new victims for his death camps.  On a more rational note, maybe it’s a regime grasping at nuclear straws to avoid the fates of Saddam and Gaddafi, the go-to line now of the Kims themselves.

In a sense, all of them have true enough strands, but all of them overlook a basic point: North Korea is very small, very isolated, and very containable.  There is no good reason for America to wag a nuclear sword at it, or for the U.S. to take its propaganda seriously.  Nor is there good reason for China to risk its neck for its rude antics.

Unless you think in terms of the credibility gap.

For China, the credibility gap is a threat to its “peaceful rise.”  If China seeks to supplant, supplement, or balance the American world order, it cannot afford many mistakes.

North Korea is a Cold War geopolitical relic in more ways than one.  The regime of Kim Il Sung, the country’s founding father, was given form and function by China’s Mao Zeodong.  In the euphoria of victory after the Chinese civil war in 1949, Mao saw China as the Asian arm of global Communism, primed to exploit collapsing European empires.  Korea was a springboard for contesting Japan and dominating northeast Asia.  In such times, China saw the path to hegemony through the lens of Communism.

But China no longer wants to project global Communism; North Korea is no longer ideologically useful.  Nor it is as strategic as it once was.  China’s peaceful rise is not based on aggressive expansionism, but rather in testing American alliances and hoping the U.S. makes mistakes that it can exploit.  It’s island-building strategy in the South China Seas makes more sense when thought of this way; this is not land-grabbing war-mongering, but institution-testing alliance-cracking, trying to prove the Americans and their rules are not credible to the states of the region.

This makes a massive army on the DMZ less useful to China; the notion that they’re overly worried about an American army on the Yalu River is overblown, since any conventional invasion by the U.S. against a nuclear power is simply unthinkable.

Rather, for China, North Korea is an unfortunate linchpin in the peaceful rise strategy.  To convince states to switch to the Chinese camp, Beijing must be seen as a reliable guarantor of security and prosperity.  But because China spent years burning bridges with the Soviet Union, it has almost no historical alliances leftover from the Communist era – except North Korea.

So Beijing has been forced to walk a fine line: it cannot abandon North Korea wholly or it risks setting itself back for years as a credible partner as part of its peaceful rise strategy, but nor does it benefit from North Korea’s saber rattling, nuclear program, or hopes to reunify Korea under the Kim dynasty.  Nothing would upend a peaceful rise like a general war in northeast Asia.

Instead, China has been content to allow North Korea to steadily isolate it through its own bad actions.  Thanks to continued North Korean missteps, China has been able to cut some 1/3rds of its exports to the regime.  The seismic nature of these sanctions shouldn’t be understated: China has avoided punishing North Korea substantially for years, and only after repeated slaps in the face has Beijing finally brought to bear some of its considerable power.

That solves the Chinese conundrum nicely: the worse North Korea behaves, the less it looks like China is abandoning it and the more it looks like a responsible, mature member of the global community.  That keeps it from being exposed to a new credibility gap.  The peaceful rise, in other words, can continue.

If the Chinese worry about their grand strategy hitting too many bumps in the road, the Americans worry on a more primal level that their superpower status could be fatally undermined by some sore spot like North Korea.  Trump’s rhetoric exemplifies this natural American insecurity: his “fire and fury” comment displayed the worry that the world is forgetting how powerful America’s military remains, that the big stick of the U.S. state is no longer getting the respect it deserves after 16 years of marginally unsuccessful war in the Middle East.

This is part of the reason Trump is okay with stepping on South Korea’s toes.  South Korea prefers dialogue and containment, but to the Americans, both have not worked enough to show American power and protection is reliable.  The local context therefore doesn’t matter as much as the global one: the Americans worry that other states will start to shop around for new relationships if it cannot find a decent solution to North Korea.

Case in point is the behavior of Saudi Arabia.  When President Obama retrenched and sought a more diplomatic relationship with Iran to preserve American power, the Saudis interpreted this as a sign that they had to stop free riding and start taking geopolitical risks if they were to survive.  Their invasion of Yemen, their blockade of Qatar, and their saber rattling with Iran all make sense if you think about how Riyadh concluded they could no longer get the Americans to protect them.

This could play out in Asia not in South Korea but in Japan, a nation-state whose elites currently are so worried about North Korea they are running missile drills in schools.  If America cannot halt North Korea’s nuclear advancements, it will be incentive for Japan to rearm even further, perhaps even go nuclear itself, and to find allies it can rely on better than a suddenly impotent United States.  Would it be mad to suggest the Chinese might opportunistically swap North Korea for Japan in such a case, dumping the Kims’ basketcase economy for the world’s third largest?

It might ripple beyond that, as well.  Once-stable relationships might wobble towards Russia, China, or Germany, especially as the years wear on.  That would undo a critical pillar of American power, reducing it, on a long enough timeline, to a hemispheric one.  America spent a great deal of blood and treasure becoming a global power; to lose that position is to unleash uncertainties no American elite is comfortable with.

For the Americans, solving the North Korean nuclear crisis involves restoring American credibility.  Trump interprets that to have both a hard and a soft power solution, a 21st century version of gunboat diplomacy that he believes will, quite literally, make America great again.  To avoid nuclear hellfire, such a solution will probably have some kind of military symbolism, either a near-miss war, the deployment of short-range nukes in South Korea itself near the DMZ, or even a surgical or cyber strike against some kind of North Korean target that wouldn’t trigger a general war.

That kind of move would restore America’s credibility and rattle China, if it succeeded.  Otherwise, it would require yet more American escalation.

And herein lies yet another conundrum for China: to allow North Korea to break before America’s power is to prove China is not yet ready for the big leagues.  Yet to threaten its relationship with its biggest export partner is not something it can yet do.  Instead, it seems likely China will continue its peaceful rise by playing the good cop to America’s bad cop, letting the Americans take the anti-imperialist heat while slyly demonstrating their proposed global hegemony would be far less threatening.  Allowing the Americans to take the risks, and the blowback, of solving the North Korean crisis is the most reasonable thing for China.

Either way, an endgame is fast approaching.  A permanent state of crisis in Korea is unacceptable to both the U.S. and China.  Sooner or later, a push must become a shove.