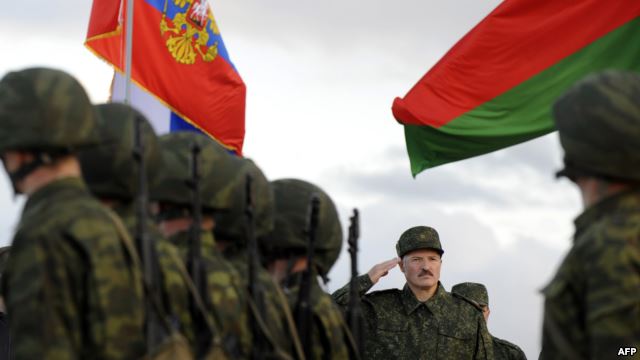 Are The Russians Sneaking Troops Into Belarus?

Russia has left troops behind after staging war games in Belarus despite promising not to, Ukraine’s Commander in Chief Viktor Muzhenko told Reuters.

His comments could increase tension between the two neighbors and contradict the Belarussian defense ministry spokesman, who said the last train of Russian troops and equipment had left Belarus on Thursday. Russia’s defense ministry did not respond to an immediate request for comment.

It’s important to note that these claims are not yet verified; that’s not to undercut the reality that Russia has all the incentive in the world to sneak troops into nearby Belarus.  Even if this particular report is discredited, it will be ever more tempting for Moscow to find ways to deploy ever larger force in Belarus.

By doing so, Russia extends the frontiers its NATO and Ukrainian foes already have to defend, while giving itself a valuable base for further hybrid war and intelligence operations.  Best of all, it puts pressure on the suddenly independent-minded President of Belarus, Alexander Lukashenko.

Belarus was one of the last republics of the Soviet Union to declare independence. In December 1991, the Soviet Union had effectively ceased to exist, but Belarus, Ukraine, and Russia continued to maintain the USSR’s legal fiction more as a matter of logistics than principle. When the three signed the Belavezha Accords in December 1991, it legally dissolved the superpower into the Commonwealth of Independent States, another geopolitical fiction.

But Belarus was a landlocked country without the industrial base of nearby Ukraine, and so had to rely more heavily on Russia for economic prosperity.  Common cultural and linguistic links smoothed the two states’ relationship in the 1990s, culminating in the 1999 formation of a “Union State” that was aimed at formally integrating Belarus into Russia.

In 1994, Belarus ended up under the control of Alexander Lukashenko, a former Soviet army officer, who saw little value in democracy.  Unlike nearby Russia, where liberal democracy made inroads in the 90s, Belarus remained a firmly one-party state that functioned a great deal like the former Soviet Union.

As NATO and the EU surged into the former Warsaw Pact and the Baltic States, Lukashenko’s already meager geopolitical options shrank.  To embrace the West was to almost certainly undo his own power base; to integrate with Russia formally was to do the same.  In the quieter 2000s, he leaned heavily on Moscow and Vladimir Putin to avoid Western pressure to reform, knowing Russia could do little to dictate affairs to him.

Russia had good reason to want to hold Belarus in its orbit.  When Russia was weak, the Moscow-Minsk alliance was one of the last vestiges of Soviet power, proof that while Russia was down, it was not out.  As the United States reordered the Balkans in the 90s and bombed once-critical Serbia, the Belarus alliance was solace to a humbled Kremlin.

In those days, Russia was in no position to order Lukashenko around.  He was neither a vassal nor a subordinate, and Moscow was just glad to have one firmly pro-Russian state left in Europe.  That changed as Putin reorganized Russia in the 2000s, culminating in the invasion of Ukraine in 2014.

This spooked Lukashenko, who realized, just like the rest of Europe, that Russia could and would deploy hard power to advance its interests.  The war in Syria proved this further, while Russian intelligence operations across Europe and the United States showed Moscow was prepared once more to engage in geopolitical conflict with its adversaries.  While the Union State could once be dismissed as a gallant fiction, after Ukraine it became clear that Putin did really harbor the ambitions to restore some semblance of the USSR, and Belarus was an obvious next step.

Unfortunately for Lukashenko, Belarus is hardly capable of leveraging the West against Russia.  Lukashenko’s human rights record is atrocious, and so the EU won’t even countenance treaties with him.  The invasion of Ukraine in 2014 has put a firm halt to NATO expansion as Brussels worries it will further provoke Russia.  Instead, Lukashenko is forced to face down a powerful friend who might just embrace him into oblivion.

Should it be proven that Russian troops are now permanently deployed in Belarus, it wouldn’t be unprecedented; Russian forces have been in the country since the end of the USSR, though in small contingents.  Instead, it should be seen as an attempt to force NATO to spread its combat-ready divisions more thinly across its eastern frontier.  NATO is sorely lacking in the kind of forces that could halt a proper Russian invasion, and the deployment of offensive forces in Belarus extends an already overstretched NATO across an ever-wider frontier.

It’s also a base of operations to pressure Ukraine to the south, should Russia decide to slip arms and bombs to Kiev, which is close to the Belarus border.  Intelligence operations will also go smoother with more Russians in Minsk, shortening the logistics for Moscow’s GRU.

But it should not be seen as a prelude to a general war in Europe.  Instead, the subtle shift of forces forces NATO to pivot to places it had assumed were secured, like the Polish and Lithuanian frontier beyond Russia’s Kaliningrad enclave.  It could also be useful should Moscow ever try to discredit the alliance through hybrid operations, like those deployed against Ukraine.

Regardless, the potential permanent deployment of force in Belarus is proof Moscow intends to hold Minsk ever closer, and that it hopes to throw NATO and Ukraine just a little more off balance.  The new Cold War may be shifting westward.