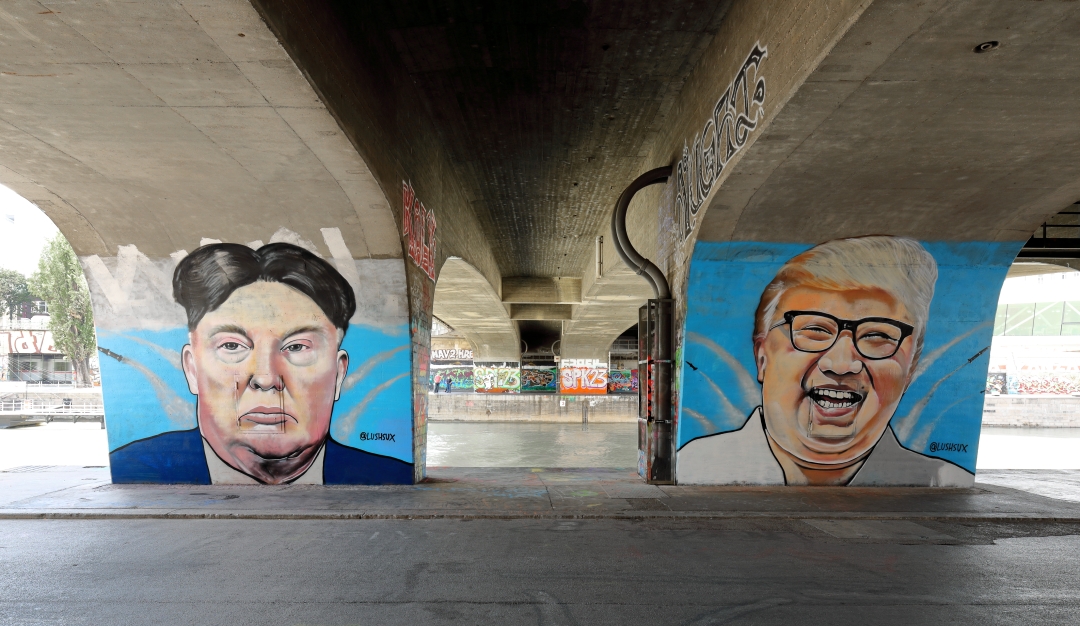 Is Trump About To Get Peace In Korea?

For the pro-Trump camp, it is a moment of celebration; for his enemies, consternation.  There they go, South Korean President Moon Jae-in and North Korea Supreme Leader King Jong Un, crossing and re-crossing the Demilitarized Zone in a symbolic ending of an era.

Just how much credit does Trump deserve for all this?  And more importantly, where is this all going?

Presidents tend to take credit for good things their predecessors started. President Obama was able to build on and expand the emergency measures taken by the George W. Bush administration to stave off the Great Recession; Trump is now coasting off the Obama administration’s delicate work in North Korea.  The Obama years saw a careful, considered approach to North Korea – one that allowed Pyongyang, rather than America, to make diplomatic mistakes and alienate its key friends and allies.  That did result in a stronger North Korean nuclear weapons program, but that was less of a failure than it first appeared: rather than earning North Korea a place at the table, it brought down ever more sanctions.

That culminated in the August 2017 coal sanctions, in which China, the North’s one true ally, finally declared that it had had enough of Pyongyang playing nuclear chicken with the United States.

But Trump does deserve some credit.  For one, he is the first U.S. president in a long time that has not tied human rights to progress with North Korea.  U.S. presidents from Clinton on down have kept on harping about North Korea’s abysmal human rights record, but Trump is far from clear that he particularly cares about North Korea’s gulags, despite his occasional public pieties.  “America First” was a strong signal to Pyongyang that this administration would approach the nuclear program transactionally as opposed to universally: the idea was not to bring about global harmony in values, but to do what’s best for the United States.  In that sense, Trump was a lesser threat to North Korea than previous administrations.  His beliefs could square a surviving totalitarian North Korea with a peace deal; peace with tyrants was fine if it benefited the United States.

Moreover, all of Trump’s talk about fire and fury has helped the situation rapidly reach the end of ways it can symbolically escalate.  There was hardly anything left to do but actually fire missiles; the more often the threats were uttered, the less effective they became politically and diplomatically.  The North had reached that wall some time ago, with its consistent calls to atomize America and turn Seoul into a sea of fire barely making a splash in media or diplomatic circles; now America has used up its most of its rhetorical ammunition as well.  –

Bereft of potent symbols, the situation could actually get kinetic – and really threaten the end of the world – it could stagnate, and achieve nothing, or it could walk itself back.  As it turns out, the latter seems to be what’s happening.

Setting the situation up for success

After all, Kim made a point of purging his enemies and potential rivals – including his own brother – after he came to power.  The greatest risk for Kim to make a peace deal comes internally, from hardliners who fear that a thaw will lead to a glasnost that will unify them with South Korea and throw them in jail.  But Kim looks like he out-hardlinered the hardliners, with brutal execution rumors and the stunning assassination of his brother overseas.  Instead of consolidating North Korea into some kind of mega-Stalinist state, he’s using his new-found power to follow the Khrushchev model and walk a bit away from conflict.

Like Khrushchev, that is perhaps because Kim realizes that there’s only so much life left in the political model he’s taken over.  Also like Khrushchev, Kim walking back from the edge of war is not the same as dismantling the system he oversees. Neither Kim, nor the elites who support him, are about to unify with South Korea if they’re going to end up like East German leader Erick Honecker, who barely escaped trial for is role in the construction of the Berlin Wall.  Instead, what they seem to aim for is some kind of system like Myanmar, in which the brutish military junta remains both a part of the system and immune to international prosecution.

That looks to be a kind of confederation, in which the North slowly but surely builds up economic and political ties with the South.  That suits the South nicely; it allows it to avoid paying the full bill of the North’s dysfunction – which is both social as well as economic – for years.  It also keeps the North’s leadership safe from persecution by the United Nations or the United States.  Best of all, in a kind of limited confederation, there would be ever less reason for U.S. troops to remain, and almost certainly no support from South Korea for any kind of American first strike from its territory.  That’s a deterrent almost as good as its nuclear weapons.

But just as Kim is turning down the heat, so too can he turn it up again.  If the game is to exact concessions for as long as he is able, then we should expect another round of threats and worry about more fire and fury someday in the future. They’ve done this before in 1994 and 2008.

This time does, however, feel different. China has a new, assertive president, who sees the world through a more muscular lens.  North Korea is not a useful buffer for this China, if the buffer provokes conflict China does not want.  Instead, for a China with more to lose, a vassal North Korea makes more sense. And perhaps that explains why Beijing came down so hard on it last August, as both a punishment for stepping out of line and as a reminder as to who has the real power in Korea.  In 1994 and 2008, Pyongyang could count on a different China; now, to push too hard is to risk angering it.

Moreover, it’s been 27 years since the end of the Soviet Union.  Much within North Korea must be past its expiration date, including its military equipment.  It needs investment to start to patch the potholes, and the only way to get that is to walk away from nuclear brinkmanship.

South Korea is different too.  It is richer than ever – and less inclined to unify with the North quickly, for fear of having to pay for the North’s rehabilitation.  Since the South no longer feels like the North will come thundering over the DMZ, the main threat is instead the cost of fixing the North.  Better to draw that out over years, with non-aggression pacts turning into peace deals and peace deals turning in confederations and confederations turning into federations.  That might be a multi-decade effort in which the pain of reunification is mitigated, and in which North Korea’s elites can rehabilitate themselves enough that they too might live semi-normal lives along the way.

In that sense, Trump will not get any more credit for the end of the Korean crisis than Eisenhower gets for ending the Cold War.  As Eisenhower brought the successful containment strategy to bear, he did not live long enough to see it bear fruit; instead, it’s Reagan who’s most likely to get the credit, even if unearned, for ending the Cold War.  Trump may get his photo op next month, and the handshakes made there may end up in school history books; but this is, at best, a beginning.  The road ahead to Korean unification is long.

What about the stuff I do professionally?  Here’s links to some of my work produced together with the capable team at Stratfor.

Israel Confronts Its Changing Demographics – For Israel, it’s what’s on the inside that counts

Is the Syrian stalemate between Iran and Israel about to end? – Seems more and more like it.  Here’s why.

Youth Unemployment: The Middle’s Ticking Time Bomb – If they can’t get youth unemployment below 30% soon, Arabs will rise again.

7 thoughts on “Is Trump About To Get Peace In Korea?”