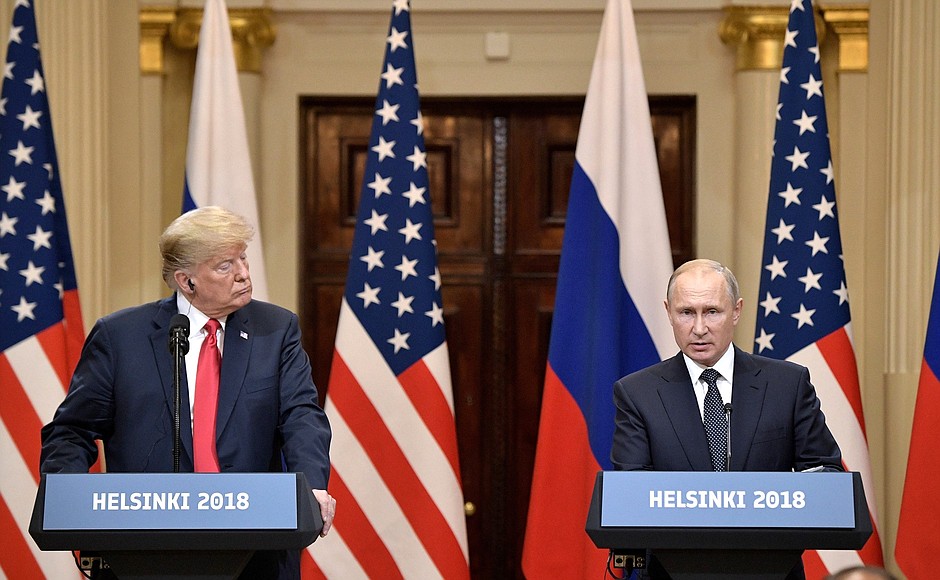 Despite Trump, America is still going to rival Russia

Helsinki was, by virtually every American political measure, a disaster.  Only the Trump base – the very people he need not convince – were unaffected.  Their commitment to Trump is a fascinating phenomenon in and of itself, as is Trump’s willingness to preach to this particular choir even at the expense of actual governance.

But beyond them, it is still an important question to ask, just what is Trump doing? What world is he trying to build?  And is he going to get very far?  The short answer is an Alt-Right one, and probably not.

Let us return to that old theme, the Alt-Right

Post-Charlottesville, as Steve Bannon slipped beneath the media radar and trade wars erupted and Trump bombed Syria and deportations forced children from their parents, the Alt-Right, as a label, has slipped from view.  That is a mistake.  Just because you can’t see Steve Bannon in the White House does not mean his views are not still there.

And we also must remember what moment we are at in time.  We’re at the end of a Strass-Howe generational Crisis – and probably 4-8 years until it completely ends (the 21st century’s other cycles are discussed further in my book). This is a time in which new ideas are being tried out and discarded in a white-hot culturally competitive environment.  As such, it’s a shot for the Alt-Right to get its say in for the next cultural High – and hope that some of its ideas stick.

The Russia idea almost certainly won’t.  We’ll get to why later.

For Trump’s own part, the president is a poor ideologue, and not really very good at being properly Alt-Right. That is in part his personality; belief is not really his thing.  It’s also because he accidentally discovered the Alt-Right as a base and in turn accidentally discovered they would empower him.  He did not grow up amongst them, nor did he take part in their journey to ideological cohesion.  He simply understands they are a major part of his most loyal base, and he panders to them.

The Russia relationship is a huge part of that pandering.  For a moment, let’s step aside from the idea that Trump is under Russian influence.  He may be, he may not, but it’s very hard for anyone to say until the Mueller investigation is over.  So if we give Trump the benefit of the doubt – and remove the spy thriller part of Helsinki – then we can more readily assess what kind of world Trump is really trying to bring onto the world map, and the consequences of that.

If Trump is pandering to Russia to thrill his Alt-Right base, the question is why does the Alt-Right care?  At its core, it is because the Alt-Right sees in Russia an ally that will help carry out their objectives in pan-European nationalism – a term that can be misleading, so let’s make sure we understand that before going on.  When we say “pan-European”, we don’t mean that they want everyone who is European united.  They want quite the opposite – strong European national identities, separate from one another and especially from non-Europeans.  This is why Russia makes so much sense as an ally.  Russia does not want a European Union, or a federation with Germany.  It wants a powerful, united Russia for Russians, and a broken up world of independent nation-states.  The Alt-Right wants the same for European-descended Americans.

The Alt-Right sees Russia as a credible ally to push Muslims – a traditional European foe – back into Muslim territory and preserve Christian identity.  (That Russia has a huge, native Muslim population seems lost on them).  It also sees in Putin a leader whose leadership qualities – which hinge heavily on old-school masculinity – are to be emulated, and are, to the Alt-Right, at risk of being lost in the cultural changes wrought by their foes on the Left.

Their refusal to recognize Russia’s role in the 2016 election is partially personal, in that they are very attached to Trump, but it’s also ideological.  If Russia manipulated the results, then they weren’t the actual desires of the people. This sucks the wind not only from Trump’s legitimacy but from the Alt-Right’s belief that it represents a silent majority.  The Alt-Right believes – even now – that they represent a true America suppressed by the media and the country’s political establishment. (The mid-terms may shock them a bit, if projections hold true).

And how far is this Russo-American alliance of the Alt-Right going to go?

The biggest problem for their Russian alliance plan is that without Trump, the Alt-Right has no major political champion to carry it out.  True, they can try to create another one, should Trump fall from power in 2020, 2024, or some other time.  But the Alt-Right has all the feel of a flash in the political pan, and the past few days’ reactions to Trump’s comments in Helsinki seem to reflect that.

That pushback is important, because it’s showing that, regardless of Trump, America is becoming increasingly stridently anti-Russia.  The GOP is divided, and those who are excusing the president are a decided minority.

In 2015, I wrote the following in an earlier stage of the Russo-American competition:

Either way, no president will be elected from now on with a platform of “Don’t worry about Russia.”  Each election will ratchet up the pressure the Americans can bring to bear on Moscow.  That pressure is considerable.

I was wrong about a president being elected on a “Don’t worry about Russia” platform, since that’s largely what Trump did.  But I stand by the original assertion that each president going forward will come under intense pressure to do something about Russia.  Trump was forced to walk back his comments that seemed too warm to Putin.  Congress has imposed sanctions on Russia and elites connected to Putin; the United States has sent advanced Javelins missiles to Ukraine, even if they supposed to be kept far away from the civil war’s frontines; America has bombed Assad, twice, for chemical weapons, which has shown Russia still cannot fully protect its allies from America; it has tried to sabotage a major arms deal between Russia and Turkey.  America’s institutions are doing something, even if Trump is dragging his feet.  That energy can be readily harnessed by his successor.

That means there’s a very high chance that post-Trump, we’ll see a pretty high-profile anti-Russia strategy.  The Alt-Right can hope for a second term, a chance to slip through to the end end of the Crisis and to the next High where their ideas become at least partially mainstream.  But the Russia platform is deeply unlikely to make the cut.  Despite Helsinki, Russia is America’s rival.  It’s just a question of when the White House acts like it.